One University
KCU's Commitment to Diversity, Equity and Inclusion

Equity seeks to ensure fair treatment, equality of opportunity, and fairness in access to information and resources for all.

Inclusion builds a culture of belonging by actively inviting the contribution and participation of all people.

Anti-Racism is defined as the work of actively opposing racism by advocating for changes in political, economic, and social life. Anti-racism tends to be an individualized approach, and set up in opposition to individual racist behaviors and impacts.
(Source: RaceForward.org)

Ethnicity refers to the social characteristics that people may have in common, such as language, religion, regional background, culture, foods, etc.

Individual racism can include face-to-face or covert actions toward a person that intentionally express prejudice, hate or bias based on race.

Institutional racism refers to the policies and practices within and across institutions that, intentionally or not, produce outcomes that chronically favor, or put a racial group at a disadvantage.

This term refers to the pattern in which progress is made through the passage of legislation, court rulings and other formal mechanisms that aim to promote racial equality.

In a racially equitable society, the distribution of society’s benefits and burdens would not be skewed by race.

In many ways “systemic racism” and “structural racism” are synonymous. If there is a difference between the terms, it can be said to exist in the fact that a structural racism analysis pays more attention to the historical, cultural and social psychological aspects of our currently racialized society.

Source: All glossary terms above are from the Aspen Institute unless otherwise noted. 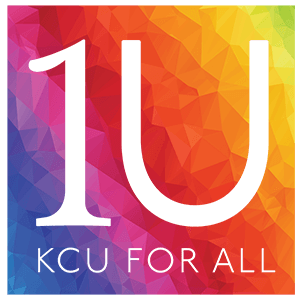 KCU is dedicated to ensuring that our campuses are supportive, safe and vibrant communities for all.

Affirmed in 2018 with the launch of our most recent campus climate study, and continually reaffirmed in the time since, KCU is One University. As One University we all must respect that each of us have, and deserve, equal rights.